“No journey is formidable once you make up your mind”

Riding a bike on Rajasthan roads as you absorb the sights, sounds and smells of the sandy desert is the closest one can come to experiencing freedom. To begin with  our 2000 plus kilometre trip across the desert seemed ambitious but once we started we literally breezed through it. A highly recommended trip for a traveler who wants to touch and feel the  experience as he journeys through villages, towns cities and barren expanses of the vibrant, pulsating  land of royalty. Let us take you along  as the two of us  free spiritedly ‘stormed the desert ‘ experiencing  the ‘thunder’ on our  mean machines- Royal Enfield Thunderbird and Desert Storm.

start can overcome this challenge. We were on the road before sunrise – there was a slight nip of the receeding winters in the air so by the time we reached Neemrana after a two hour ride,  a steaming hot cup of ginger tea and hot aloo parathas at a roadside dhaba was just what we needed. We encountered some traffic at  Behror and Kotputli but by and large the five and a half hour drive to Jaipur was hassle free and enjoyable specially the last leg wherein we took the Jaipur bypass to enter Jaipur.

A couple of hours of rest and a sumptuous lunch is enough to energise you to explore Jaipur. Amer fort, Jal Mahal, Nahargarh fort, Hawa Mahal, Birla Temple, Blue pottery handicraft –You can take your pick. The foodies can try out rajasthani delicacies at  the time tested Lakshmi Mishtaan Bhandaar  on Station Road  or Santosh Bhojanalaya opposite the Bus Station,Old Jaipur.

As the people of Jaipur awakened to another day we were well on course to Jodhpur on NH8.  We had to settle for a
vegetarian breakfast as nonvegetarian  eating joints are hard to come by on the highway. After Kishangarh  just near the small town of Nareli one gets a breathtaking view of  temple structures on a mountain which are a part of the Jain temple complex. This is worth checking  out. Also a 10 kilometer detour from the highway will take you to revered Ajmer Shariff . However, parking  and leaving your bike with your luggage stacked on it while you visit the dargah can be a challenge.  At Beawar one leaves NH8 and moves to NH112 crossing small towns of Jaitaran and Dangiyawas – the drive is very picturesque with rocky mountains and vast open spaces. We were on the road for close to 10 hours before  we reached Jodhpur.  If one has the time it would be worthwhile to spend a day at Jodhpur and check out its treasures

rose above the horizon.  The road from  Jodhpur to Jaisalmer (NH114) is not a superhighway but the “almost no traffic” and ‘smooth road’ conditions make it a perfect ride.  One crosses small hamlets of Aloga, Balesar, Dehchoo, Lawan…… Seeing scores of gigantic windmills standing tall in the vast expanse surely will remind you of Don Quixote attacking an imaginary army . We also crossed the small town of Pokhran which many of us have heard of  as it appeared on the international map after the nuclear test of 1998.

As we approached Jaisalmer the desert became more like the desert we imagine- uninterrupted expanse of sand dunes , herds of camels and local women wearing colourful ghaghras and moustached men with bright turbans to match up-  perfect setting for a bollywood movie shoot.

Just at the gateway to Jaisalmer is a board “All are Welcome” – This is the Army War Museum , a testimonial to the brave soldiers guarding the frontiers. Every tourist who enters Jaisalmer stops here . I literally had goose pimples of pride as a soldiers wife ( an official guide at the museum) proudly guided us through the museum – flawlessly narrating stories of bravery and valour of our soldiers not only in the various wars and counter insurgency operations but also during peacetime disasters

We were lucky that our arrival at Jaisalmer coincided with the last day of the Desert Festival 2016 at Sam which further coincides with a full moon night – A rich cultural extravaganza with the beautiful sand dunes in the backdrop. It’s a surreal experience watching the setting sun bright an orange and then turning 180 degrees to see a equally bright yellow rising yellow moon.

After continuously riding for three days it was time to rest and explore  the Golden City of Jaisalmer.  Known for its yellow sandstone architecture the city has the impressive 12th century Jaisalmer Fort which is a towering structure having 99 turrets right in the heart of the city. Some of the places you can check out are Bada bagh, Patwon ki Haveli, Gadsisar sagar lake and Vyas Chattri ( a beautiful locale to capture the sunset). Tanot Mata temple ( of the movie Border fame) is at a distance of about 150 kms on the border with Pakistan and the road from Jaisalmer to Tanot is a  favourite roads with biker. In the vicinity of  every second town in Rajasthan there has to be a ghost town- If you are intrigued by ghosts you can check the abandoned ghost village of Kuldhara.

But my vote goes to a serene evening at the Sam which is a 70 kilometre beautiful drive from Jaisalmer. Local folk artists singing and dancing on the sand dunes is a treat and an unmatchable experience .

Day 6 February 24, 2016  Jaisalmer to Bikaner (340 km)
Rested and refreshed we were yeaning to be back on the road. The drive to Bikaner really has nothing much to report home about- only that there were patches which were under construction and it was difficult to maneuver our bikes through these wet clayey patched road ( Hopefully by now a road would have replaced these patches). One  can take a slight detour to Ramdevra a place of religious significance  about 12 kms from Pokhran. Just short of Bikaner is Gajner Palace which has been converted to a heritage hotel with a lake view. A major tourist attraction at Bikaner is the Junagarh fort which is well maintained and impressive and houses a museum.  Dinner at Laxmi Nivas palace can make you feel like royalty with kalbelia dancers dancing and you eating lal maas , ker sangria and gutte ki sabji. The Bikaner experience is incomplete without the famous Bikaneri paan now also available in innovative flavours like chocolate . 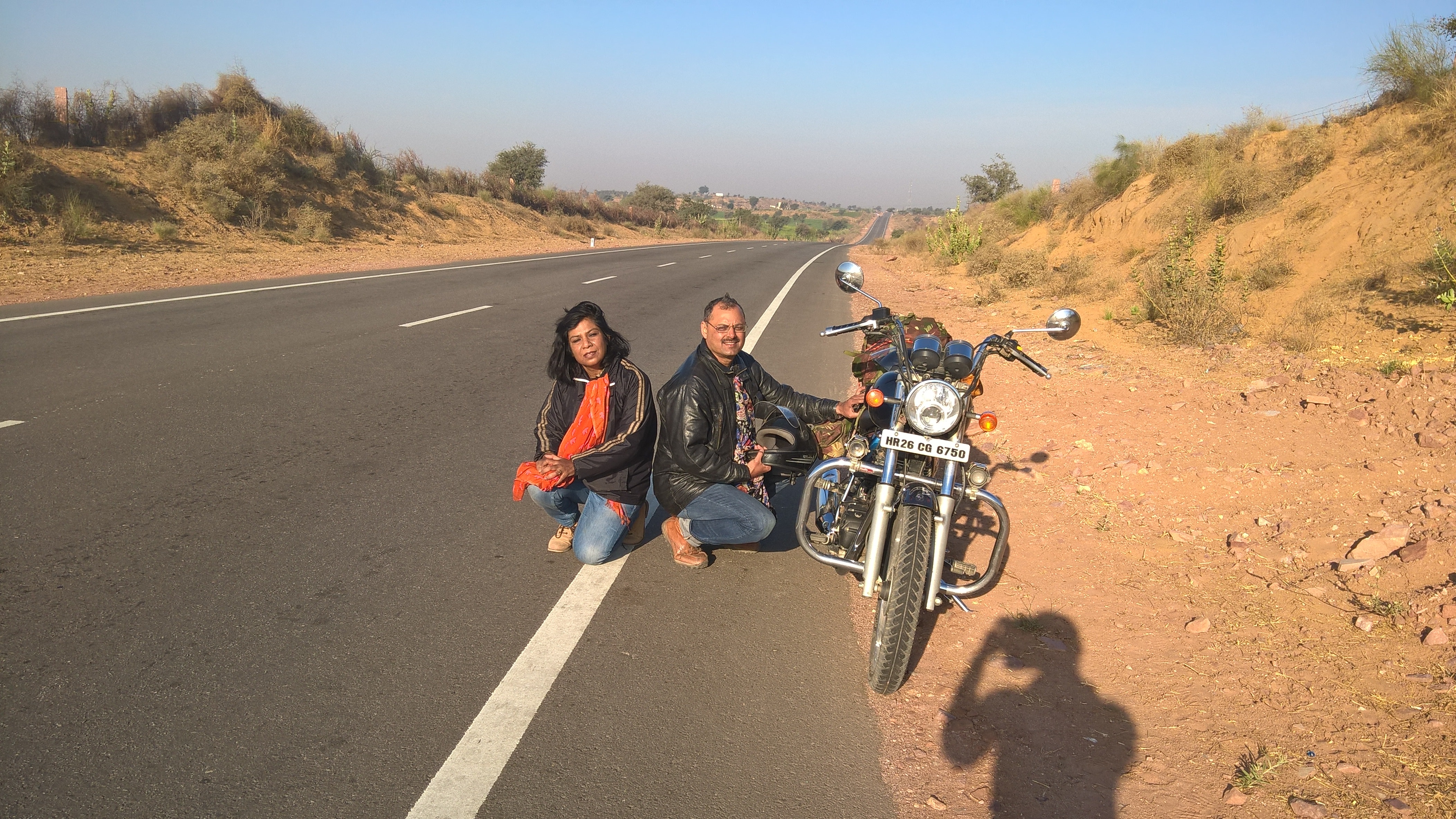 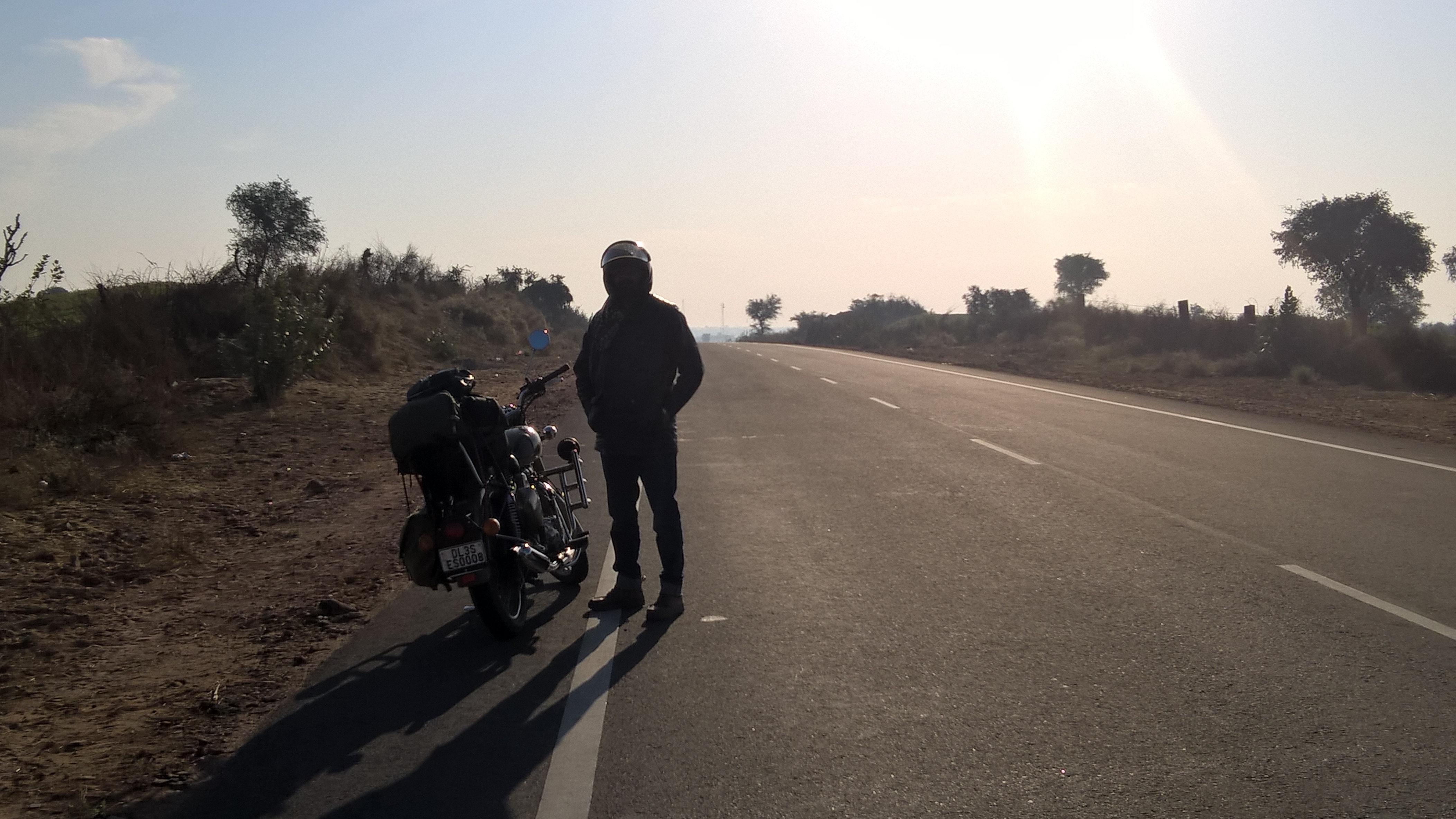 It was a grand finale for our tryst with the desert as we clocked almost 500 kms on the last day of our journey. We

were apprehensive to begin with as the distance is  slightly on the higher side which meant being on the road for almost 12 hours but having pulled it off we felt realy satisfied.  We left really early- it was still very dark and for the first two hours we were chilled and frozen as we rode along. But as the sun rose we thawed and started enjoying the drive. We passed through the towns of Sri Dungargarh, Ratangarh, Fatehpur, Sikar, Neem Ka Thana, and the topography changed from the barren lands and thorny kikar trees to rocky mountains ahead of Sikar and finally the urban cityscape as we hit the NH8 at Kotputli on our way to Gurgaon.

All journeys must end and so did ours . As we parked our mean machines we knew we had caught the wanderlust bug and it would be very soon that we would be off  on our bikes exploring and experiencing a different land.