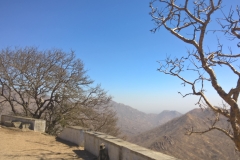 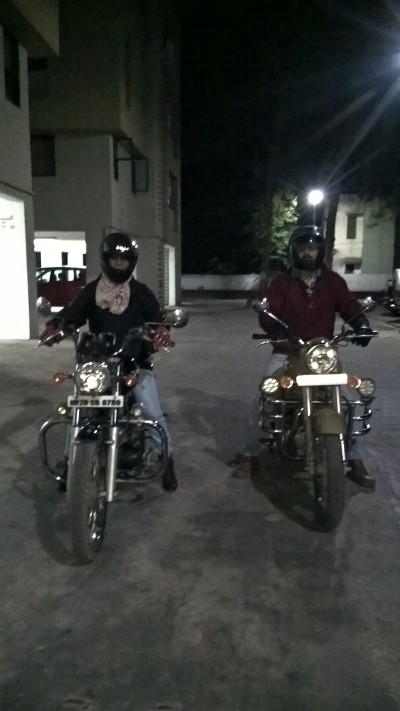 Summer in its full blast with Gujarat reeling at 43 degrees  going a biking trip did not in the first instance seem like a very good or doable idea. But the restless souls that we are, we took the plunge resulting in one  of the most memorable and recommended weekend explorations from Ahmedabad. to Mount Abu- Mount Abu being the only hill station in the near vicinity where we could expect some respite from the sweltering heat.

To beat the heat we left Ahmedabad at 4:30 am while the stars were still shining brightly in the night sky. The air was unexpectedly cool giving no indication of the high temperature the region was experiencing. A perfect time to ride and savour the experience as the dark sky changed hues with the sun rising as we reached Mehsana , a distance of about 80 kilometers from Ahmedabad. Do look out for the board on the way to Mehsana which indicates the point from where Tropic of Cancer passes. A short refueling break at Mehsana and we were back on the road.

About 20 kilometers into the ride from Mehsana we caught whiff of a very pleasantly distinct aroma of spices more specifically ‘ Jeera’ heralding the town of Unjha which is known for being the largest spices market of Asia. The 1200 year old “Umiya Mata temple” dedicated to the clan goddess of the Patidar community and an ancient 125 year old Jain temple attract a lot of religious tourists. Close to Unjha is the small town of Unnava where a famous Pir- Mira Datar shrine  known for its powers of curing people possessed with black magic is located.  The traders and the pilgrims make these small town very lively and busy. Ask a local about what is unique about the place and very proudly you will be told that Dev Patel of Slumdog Millionaire fame has his roots here.

Our next stop was Siddhpur at a distance of approximately 25 kilometres from Unjha. One has to take a turn from 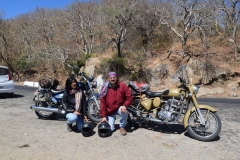 the State Highway 41 and travel a few kilometers to reach Siddhpur. We were in two minds whether to take this detour or head straight for our destination but finally our explorer side got the better of us ad we decided to take the turn- It was well worth it. It is claimed that this historic town of Siddhpur is located on the banks of river Saraswati– a river which dried up and was lost in the desert more than four thousand years ago. Apart from the ruins of Rudra Mahalaya and Jami Masjid there is a Bindu sarovar here which has a great significance for Hindus. Not many know about this lake but what is intriguing is that it is the only place where a Hindu ritual called ‘Matru shradh” is performed. There are many places in India like Gaya, Benaras, Haridwar where Hindus perform ‘Pitra Shraddh’ which means the descendants performing rituals so that the souls of their departed forefathers go to heaven. But here this ritual is performed for the mothers side of ancestors. 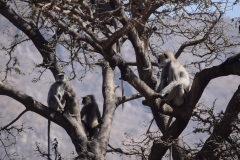 We had developed quite an appetite by this time and so we had a sumptuous breakfast of stuffed parathas and tea at a roadside dhaba. There is no dearth of eating places on this highway and you have a choice of Gujarati, Rajasthani, Kathiawadi dishes apart from the regular Punjabi and Indianised Chinese offerings. We crossed the town of Palanpur. The town has nothing much to offer except a few temples. There is Jessore Sloth Bear Sanctuary at a distance of about 50 kilometers from Palanpur but since the temperatures were already rising we decide to give it a miss and leave it for another day. Crossing the small town of Chittrasani we reached Abu Road which is where the climb to the mountains of Mount Abu starts from.

As we started climbing the Aravalli mountains the air got cooler and the scene picturesque. We made a couple of stops on the way at various viewpoints and basked in the beauty of the clear blue sky, fresh air and the mountains. The road throughout had been smooth and hassle free and when we reached Mount Abu after a six hour, 250 kilometre drive we were still fresh and full of energy to explore this quaint hill station in the land known for its deserts. 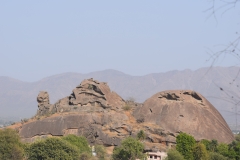 An idea of the distances : 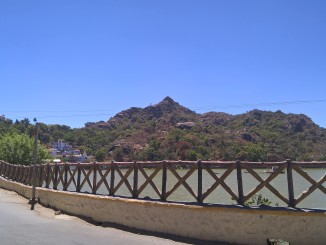