Attending a music concert is generally considered to be the domain of people who understand and know the nuances of classical music. A person who is equipped with the knowledge of ‘Pukka Raag’ would sneer at commoners like us whose understanding of music is limited to knowing a few names of renowned classical singers and Raagas.

Little did we realise that we were committing ourselves to an experience of a lifetime and probably getting introduced to a new genre of music when when we saw a newspaper clipping about a three day ‘Thumri Festival’ being organized from August7-9, 2015 as a part of the series of cultural events of the Delhi celebrates initiative of Department of Art Culture and Languages, Government of Delhi. Inspite of the fact that our choice of music ranges from infinity to infinity let us admit that wewere a bit skeptical and probably intimidated at the prospect of attending the concert as it had the word ‘classical’ attached to it. The concert was at Kamani auditorium – a part of Lutyens Delhi we love and never miss a reason to go to. This tilted the balance in favour of going. We made an interesting trio- the two of us accompanied by young Sahil – a ‘Rockstar’ in the making . Now that we had made up our mind the heavy rains, Kawarh menace, water logged streets and the chaotic traffic did not dampen our spirits and by the time we reached Kamani we were excited and curious about how the evening would unfold.

We reached ‘Kamani Auditorium’ in time to get our preferred seats after waiting in queue for a few minutes. Here, I must compliment the team that organizes these events because they have an indisputable record of starting bang on time as mentioned in the programme.

Within a few minutes we saw, what can be called a very humble, unpretentious and unostentatious start of the programme that began with Thumri gayaki by Dr. Uma Garg. Still a little skeptical about how it’s going to turn out I settled uncomfortably in my chair. Moments passed and I foundmy fingers moving to the melody andfoot tapping to the rhythm. I saw my companions on my right and left and I knew I was not alone. They looked as lost in the magic of melody as was every single person either occupying the 600 seating arrangement or sitting on the floor of the aisle. After an hour when she left the stage to give way to another artist we were glued to our chairs.

Contradicting the popular belief that the younger generation has lost interest in classical forms of music it was heartening to see the hall packed with youngsters like Sahil who were totally engrossed in the ‘thumri’ and found the music ‘cool’. To our amusement Sahil in his typical style said, “I was wondering if they are simply jamming or following a structure but whatever it was it was very nice to the ears”.The next performer Nabhodeep Chakraborty probably in his late twenties represented this promising generation. With intermittent explanations about the ragas and the compositions he captivated the audience with his singing for almost an hour. By now I was beginning to understand that towards the end every thumri ends in a fast accelerated tempo set on the tabla and probably I would describe this sequence as the climax of the ‘thumri’ with all energies concentrated in those few moments transporting you to a world beyond. Later, on trying to find out more about it I got to know that this concluding segment has a name-‘Laggi’. 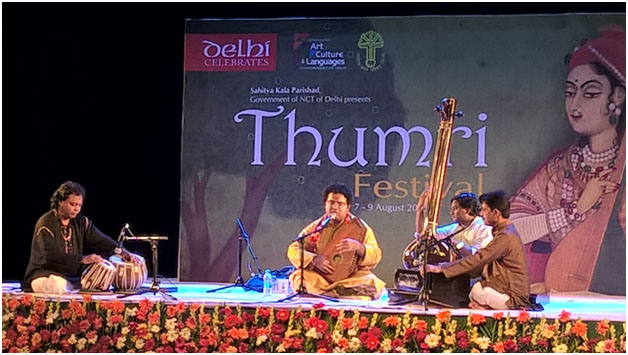 And then on the stage was a person whose name was the only heard name and I had earlier also enjoyed her performance on Doordarshan. An eighty seven year old gleaming ‘Girija Devi’ descended on the stage like a star. Honestly, I have not seen any other woman her age look as beautiful. Her presence on the stage was pure magic. She spoke those unassuming words and there was an instant connect between her and the audience. And, connect was not that of an artist and the listeners but like she was there to sing for all of us individually. Sometimes she was a friend, sometimes a companion and then at other times she would chastise for clicking her pic “Buddhikikya photo kheenchrahe ho?” (Why are you clicking photo of an old woman?) she so charmingly said. Her singing cast a spell, overwhelmingly rich in expressions and emotions. She had two disciples who sang along. The rich heritage was evident in their performance too. She with pride mentioned that the young tablaartist who was accompanying her was the sixth generation and it was clearly evident that this young boy was putting his heart and soul to give her the reverberating accompaniment to make it a resounding experience for the listeners. Every now and then people stood up to give a thundering round of applause. She sang Thumri, Dadra, Jhoola and we just swung along. At the end of it all she left us asking for more and more and yet more. There were requests galore when she stood up to acknowledge the hall packed with her admirers. She just smiled that mischievous smile which spoke volumes of the craftsperson she is who knows how to weave strings of melody together to create a magical shroud that would cover all. Her music is beyond boundaries, generations, times and ages. It breaks the divide between knowledge and ignorance. It simply touches all. 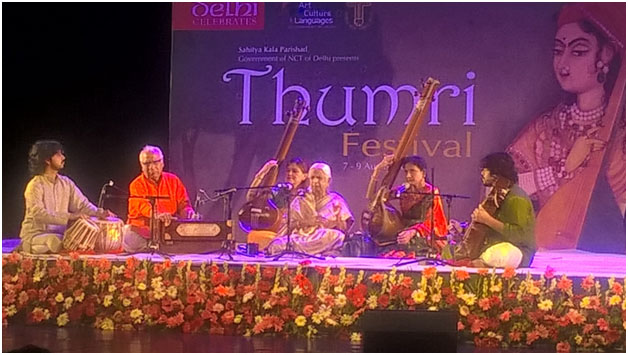 We looked at young Sahil, who swears by western music, and he looked as mesmerized and happy. As we drove homeI found myself humming a ‘thumri’ and definitely the experience had left us yearning for more.