The story so far……………..
Sunita started her “journey with a purpose” ( dual mission to spread awareness about ” Beti Bachao, Beti Padhao” and “Save the Environment”) on July 15, 2017 from Kanyakumari. After travelling a distance of 4196 kilometres through 9 states she reached Jispa in Himachal Pradesh on August20, 2017- Day 37 of her Solo Cycling Expedition from Kanyakumari to Khardungla.  The updates of her story stopped temporarily as the cyclist was in a  ” No network Zone” but the Sunita was unstoppable and her journey continued. Today we continue the story of this incredible journey from where we left it last- the small Himalyan hamlet of Jispa in Himachal Pradesh as Sunita woke up to a sunny morning on Day 38 of her journey.
Bright and energetic – Sunita left Jispa at 8:30 am accompanied by her sister Jen who joined her at Manali and Miguel whom they met by destiny’s design at Tandi.
The going was tough and slow. Their first break was at Darcha at a distance of 6kilometres from Jispa where they crossed a police check post. The cyclists had to make a formal entry into a register at the checkpost which keeps track of all the travellers passing through the route. The friendly policemen at the checkpost found it hard to believe that Sunita had come cycling all the way from the Southernmost tip of India.. They gifted her a road map which came to be very handy in days to come.   The landscape throughout was beautiful- kind of surreal with an unimaginably blue sky in the background.
The trio could not resist the temptation to stop at Deepaktal- a small high altitude lake which had the clearest water imaginable.

It was a beautiful feeling which seeped away the tiredness of the ride so far when Sunita dipped her feet in the ice cold water of Deepaktal.  It was heartening to meet a couple who had come all the way from Poland and were exploring this beautiful but challenging terrain on bicycles. After lunch at Deepaktal the cyclists were back on course.

As per the map and signposting the cyclists were relieved to see that their destination for the day Zingzingbar was 5kilometres away. After being on the road for more than 8hours these 5 kilometres  felt unending ,However, there was no respite after doing the 5kilometre stretch – as all they found at the end of it was a BRO outpost where they were told that they need to go another 5kilometres to reach ‘Bada Zingzingbar’ where accommodation and food would be available.

They had no choice but to carry on another long stretching 5kilometres before they checked into a tented dormitory.. Here they met bikers (motorcyclists) from Ukraine who were curious to know about Sunitas journey- they exchanged notes, played cards and relaxed-preparing themselves for the next day. 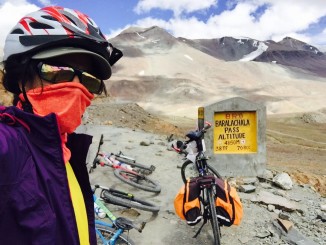 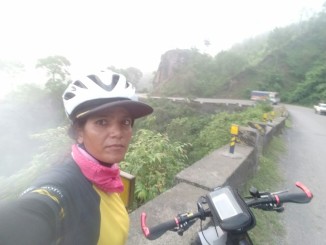 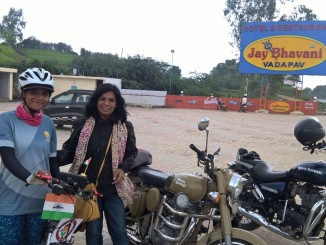